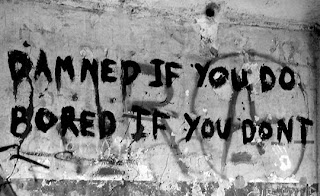 Psychopaths are Known for getting Easily Bored and for having a Low Tolerance for Frustration. They're also known to have Shallow Emotions or Low Affect.

3.  NEED FOR STIMULATION or PRONENESS TO BOREDOM. An excessive need for novel, thrilling, and exciting stimulation; taking chances and doing things that are risky. Psychopaths often have low self-discipline in carrying tasks through to completion because they get bored easily. They fail to work at the same job for any length of time, for example, or to finish tasks that they consider dull or routine.

7.  SHALLOW AFFECT. Emotional poverty or a limited depth of feelings; interpersonal coldness in spite of signs of open gregariousness.

How do the two things go hand in hand: Not having much emotion and yet being unable to tolerate the frustrations of Boredom?

One of the most important things I'm trying to explain to the clinical psychological community is that boredom in and on itself has rarely been enough to make me go out of my way to achieve a satisfying sense of intensity in life, that little extra about living life to it's fullest that is so inspiring and fulfilling.

As much as I need intensity and Thrills, I am equally capable of feeling intense emotional discomfort when I am deprived of it. If that wasn't the case, I assure you, there are many of my past acts that I would never have undertaken. It is with this in mind that I have also in previous articles admitted that I do to some extent regret my high level of Antisocial Traits i.e. Factor 2 Traits.

There are psychopaths who are extremely high on both Factor 1 and Factor 2, and who out of mere boredom will engage with sometimes extremely horrendous acts, but they do so without the strong incitement of intense discomfort associated with being deprived of stimulation which some of us experiences and which is overall also the more common. These psychopaths are the ones who score the maximum of 40, or near 40, on the PCL-R.

It is in my opinion very important to remember that this distinction exists between on one hand the group of people who's psychopathy is so severe, and who's Factor 1 and Factor 2 traits are so high, that they don't care about being antisocial or not, and who (admittedly just as important) also don't care about the risk of being caught for having indulged in crimes that are just too extreme to go undetected, and on the other hand the group of people consisting of the majority of psychopaths who aren't quite that high on the Flat Affect scale and who truly do struggle with the effects of being deprived of stimulation, or - as professionals prefer to put it - struggle with the effects of being deprived of alternating outlets to relieve boredom.

Dear Zhawq,
You talk about things in general, but lets get down and dirty. What do you do personally for excitement? What really makes you tick? What qualities in a person makes you really want to pursue them? What fulfills your needs?

Zhawq, what is the distinction between the two groups?

It seems to me from reading your post that someone who "struggles" with the effects of boredom would be MORE prone to acting on it in antisocial ways than someone who experiences "mere boredom," yet you're saying that isn't the case.

Is the flat affect the key here, or is something else?

I'd really like to understand this. What is it that I'm not getting?

Being a Type 1 Psycho/Socio. My composure far outweighs my patience, which day to day encounters truly test. Work for example, if I had low impulse control I'd have already committed mass murder, but majority of the time It is extreme boredom.

To Anon, it's all about the level of impulse control that varies person to person and the myriad circumstances in which they are in that dictate what actions they take.

Why don't you get wifi somewhere else if your internet goes down? Many places offer it now.

OK, I think I get it. You're saying that those with super-high scores on the PCL-R can be motivated into mayhem by mere boredom, while those with a lower score (like you) need intense discomfort from their boredom to inspire them...is that right?

So mere boredom is not enough to incite you doing something you would regret.

What is the score you were given, Zhawq? Just curious. It's up there, isn't it?

My theory is that psychopathy is a spectrum...until you get to a certain point, and then a switch flips and all hell breaks loose. What are your thoughts on this?

And what are your thoughts as far as the "x-factor" that makes that switch flip? It's been called the missing piece of the puzzle.

Is it affect, or impulsiveness, or something else? What is it that removes the last of the braking mechanisms, if there were any to begin with, and tips everything over the edge?

I do things out of boredom or out of frustration. The frustration part is what represents a problem because it implies a certain lack of control.

"Zhawq, what is the distinction between the two groups?@

AH man, you hit on a issue for me here.

I get quite frustrated, and I also get bored. although these can become a bit burdensome , my affect isn't raised that high from it and this boredom and frustration doesn't quite equal me doing something to change it.

In my opinion I am frustrated at a world which doesn't allow me satisfaction and gratification, I feel caged and discriminated against.

I am trying to link them myself now, when I am bored I try to kick myself into doing something, anything, the more different from my usual routines the better. When I get frustrated I try and let it out with a combination of exerting physical energy and channelling my emotions into anger or thrill while hunting game.

This not acting on frustration and boredom is physically unhealthy, it leads to muscle / bone / posture related problems. It is essentially a psychosomatic block in the system.

Hi Zhawq
What is it that can prevent you from feeling boredom? Are there normal things which can prevent you from feeling it? Also how does boredom physically affect you? You talk about how it makes you feel frustrated, but does it cause your mind to slow down or speed up, can you go down other trains of thought other than being bored, does it produce a sudden urge to do random things to alleviate it? Boredom is something of an alien concept for me because due to my Aspergers I'm constantly overstimulated.