Tell Us About Your Murders! 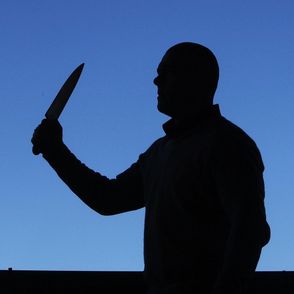 Readers have asked me to write an article (or three articles) about the killings I have committed, and for a long time I felt that in order to share my story honestly and completely I would have to describe these events as well. After all, they are no small part of what defines me, in the past as well as the present. I may like to think it has nothing to do with who I am today, but I also know that in a normal neurotypical person's view it will always impact the way they see me.

So I meant to write about these events - the times when I killed another person - and I've spend a good deal of time thinking about how I could do so in an agreeable manner. Especially when a writer send me an email explaining how it would be helpful to him if I would share these experiences with him. When two weeks ago I received another mail, also from a writer, who said much the same thing, I began to think about it again: How might I describe what I have done in a way that would be helpful and informative in a constructive way to those who read it, and at the same time not put my own safety (read: freedom) at risk?

But the conclusion I have come to will no doubt disappoint some of my Readers...

Some day I may write about my killings, but at the present I have decided to not do so, mainly because I could place myself at risk, mainly the risk of loosing my freedom for good. To some this may sound ludicrous: What could possible put me at risk? The authorities already know everything down to the smallest detail, and I have been punished for the crimes I committed.

However, it is not that simple. People who, like myself, have lived a portion of their lives at the wrong side of the law, have been in prison and have had their comings and goings among criminals, know that the law is far from perfect and people do get sentenced for things they haven't done, or they simply get framed. This is not to say the law is evil and out to hurt anyone they can get their hands on, but mistakes happen, and a lot at that. Believe me, I have seen it. I myself am not among those who have suffered from much injustice of this sort (though I too haven't been completely free from doing time for things I didn't do), but I have gotten to know people who were sentenced and did time for things I'm absolutely certain they didn't do - not to mention a few I KNOW didn't do what they were in for, because I knew who did.

This is what I might face if I chose to describe the more serious crimes I have on my conscience. A few words phrased the wrong way could be the end of me. I could end up being charged for killings I never did. If you have killed once, and especially if you have killed more than once, you will be in a database and reviewed when new "old" murders appear or get re-viewed for whichever reason, if new circumstantial evidence has come up or is believed to have come up. It is this that I don't find I want to risk my life and freedom for.

Some might argue: "But other authors write about murders in the first person tense all the time, what's so different about you doing the same? You're just a writer, right?". Wrong. I am not just another writer, I'm hardly a writer at all when it comes to that. I'm a provider of information, some of which is about myself and my own life, and this makes me very much different from another writer who write about murder and killing.

Granted, there are writers who write about their own criminal past and write about killings they have done. In my view these people are taking a chance, but then again, they are also often in prison for life already and have little to loose. Far be it from me to tell them they shouldn't tell us about their experiences, I always think it's a good thing to be given information, however dark and unbecoming it may be.

But this is where I stand, dear Readers, at least for the time being. It is my hope that you will understand why I have to do it this way.
Posted by Zhawq at 3:53 PM

I do not approve. But ok.

Just started reading your blog. I understand your hesitancy for sharing the details..but I am curious as to what your STATE OF MIND was when all of these killings were occurring. I don't want to hear physical details of the killings. I want to hear what was going on in your head--the emotions-the thoughts. Can that get you in trouble still.

I am wondering. Do you feel fear when you think about taking the chance? Fear from being a victim of a mistrial?

"I am wondering. Do you feel fear when you think about taking the chance? Fear from being a victim of a mistrial?"

No. If there really is a chance that I may get hurt, I may feel some excitement, but generally I don't feel any of that because I calculate reasonably well.