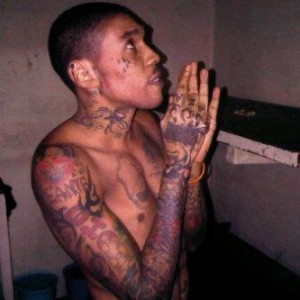 
"I would like to ask you something we know that a lot of killers and serial killers became newborn in prison my question is can psychopath or sociopath get interested in bible before committing crime? or he just does it in prison as an act? can he truly believe in whats written there?Thank you."

Psychopaths have their individual beliefs as all other people do. They differ not so much in the question about whether they believe in a god/religion, but more in that they tend to not care if they follow the scriptures and words of the god they believe to exist.

I myself believe there are many gods. Allah, Christ, Jahweh, Satan, or the many gods of various Pantheons, are all real in my understanding. But I don't adhere to any of their teachings even though I was brought up with the Christian faith, as most Westerners are.

Again: Basically the question of belief is one that only the individual person - psychopath or non-psychopath - can decide for themselves.

But I will say this: Most of those who become what you call 'newborn' (Born Again Christian) in prison - if they're psychopaths, anyway - generally don't do so because they suddenly have had a revelation and now believe in Christ when before they didn't, they're doing it because they hope it may influence heir case in a positive direction. You can't start believing in something like you press a button to open a program, it has to come from within and must start somewhere unrelated to mere self interest. So if you didn't believe in Christ before you killed or before you were caught and sentenced, there isn't much chance that you will believe afterwards.

To your question about whether a psychopath would become interested in the bible before committing a crime, the answer is much the same. If he is already a believer, he might want to consult the bible before engaging in crime, especially something that is considered very serious by the Christian faith. But if he has no relationship with religion at all, there isn't much chance he would suddenly want to read the bible while preparing for a crime. Rather, he'd be interested in learning as much as he can about the crime and how to get away with it - unless he's acting on impulse or in a fit of anger, in which cases he won't be likely to think twice about what he's about to do.
Posted by Zhawq at 11:20 AM


I saw an interview with Ted Bundy, right before his execution. Assuming he's a psychopath, he played his role very well, it was almost 'touching'.
Although the largest part of his explanation is about pornography, he also involves the God-thing in the interview. I found his sentence
, in particular, quite ludicrous:
"I know people will accuse me of being self-serving, but through God’s help, I have been able to come to the point, much too late, where I can feel the hurt and the pain I am responsible for. Yes. Absolutely!"

But why does he act like feeling remorse and guilt?
He was executed the day after.
Did Ted like to play a game with the interviewer, even at the end of his life, leaving this man with a more 'plausible' explanation for his deeds? Is it that?

"I myself believe there are many gods. Allah, Christ, Jahweh, Satan, or the many gods of various Pantheons, are all real in my understanding."

Hello, Mr. P. Zhawq. To actively believe in even one God is irrational (because there is precisely zero evidence to support the existence of any), but to state a belief that "ALL [emphasis my own] are real" is the very height of irrationalism, good sir. Moreover, the contradictory nature of such a belief is VAST!

I have had this conversation with others like me, the common factor seems that we all see organised religion as a control mechanism. I find it difficult to fathem a true beliver as a psychopath. It will likely be a cause for an end.

"I find it difficult to fathem a true beliver as a psychopath. It will likely be a cause for an end."

Depends how you define 'true believer', I guess.

I could easily imagine a psychopath believing that God exists, that after death a person will go to Heaven or Hell, etc. But their reaction to that belief is likely not going to be very typical, because they won't love God and they won't fear Hell. They may think of God as someone they could manipulate by prayer and confession (my psychopathic uncle said he planned on making a deathbed confession, so he could do whatever he liked and still go to heaven - but ironically he died suddenly and unexpectedly). Or they may simply not care very much, even though they believe.

Nowadays, I'm guessing many psychopaths don't believe in God, simply because belief in God is at an all-time low, and much of the appeal of religion doesn't apply to psychopaths. But in the Middle Ages in Europe, belief in God was pretty much universal, and I doubt psychopaths were an exception.