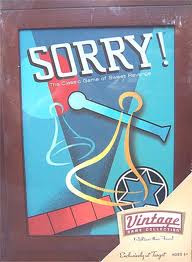 
The reason you are supposed to feel bad during an apology is because it reinforces that you truly mean it, and won't repeat the actions of which you are sorry for. When someone is apologized to by someone who regrets and feels bad for their actions, they will read their emotions and see them as adding legitimacy to the apology. Conversely, an apology which is given without any feelings of remorse will seem fake. "How can this person care when they don't even feel bad?"

This was true for me when I was a kid. I didn't understand why people didn't believe me because I really put every effort into making it seem hart felt. It was only recently during my research that I realized why I wasn't taken seriously.

However, an adult psychopath is generally perfectly capable of making an apology or any other statement come across as heart felt and honest, in fact often even more so than a neurotypical person. People only begin to disbelieve our sincerity over time when their experience mounts up and they see our actions aren't consistent with what we say. It should be noted that with many psychopaths this will only happen over a very long period, even years.

I have another argument to what you say about emotionality being important. In a certain way I will disagree because as an adult with a strong intellect you shouldn't be so dependent upon your emotions that you can't make a commitment such as giving an apology based on intellectual understanding. I'm aware that it's a controversial statement, and I agree that it's a question about how much or how little. At the end of the day there will have to be at least some kind of emotional recognition that an apology is justified or needed.
Posted by Zhawq at 7:25 AM 14 comments: