Is Power an Illusion? 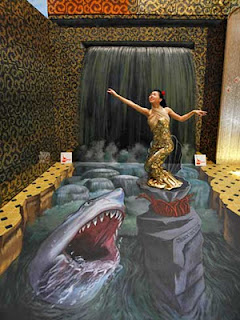 A Reader wrote about psychopaths who uses various 'social masks':

"The power trip loses it's potency once you realize that power is an illusion. Jumping out of a airplane or setting things on fire is how I get my kicks. They are real to me, power is not.

It doesn't matter if Power is an Illusion. Everything, in a sense, is an illusion. You can also say Illusion has Great Power which is just as true in a different sense. To the one who experiences it power is real.

You can't live your life according to the bad luck of others, and the Assassination of JFK is a bad example because he's a small minority of assassinated presidents.

But let's take a look at power: Power is a phenomenon that involves social interaction and feelings. It follows a line of events in time, and those involved invest energy and other things in gaining the best possible outcome for themselves.

Many say that is all an illusion.

Now let's take a look at love: Love is a phenomenon that involves social interaction and feelings. It follows a line of events in time, and those involved invest energy and other things in gaining the best possible outcome for themselves.

But for some reason I have never heard anybody say love is an illusion. What is it that makes one an illusion and the other reality?

You could say that power is something you can attach to love and vice versa, whereas love is something that can stand alone. A 'pure' phenomenon of sorts. If this is how it is, then I have to say that some people just don't have access to this particular kind of experience. We have to attach our 'liking' to something which has some form of substance, if only in the form of feeling good - which is what it's all about at the end of the day, right?

I think this is so whether or not you're a psychopath. Being a psychopath who takes on different roles according to different social situations and individuals is not being less human, it's just at an extreme end of the spectrum, but human nevertheless. Maybe power is a spectrum phenomenon too. A phenomenon on the spectrum of human experience and therefore reality. I really don't believe one emotion or way of liking something is more or less real or illusory than others.

An a final statement: Is not love the absolute power? Is not love that which nothing can conquer and which conquers all? And if this is so, is not then love just as much an illusion as power is?

The nature of illusion or reality has consequence only on the most transcendent level, and even if you're a zen monk it has no practical consequence in everyday life. We all have to eat, and we must assert power to do so, for neither animal nor plant come to us and commit suicide for our sake just because we have the power of abstract thinking.

If you now say that I twist words because I'm a psychopath and you need therefore not consider my arguments, you are certainly giving up power freely. It is in your power to do so, and I cannot be blamed!
Posted by Zhawq at 5:21 AM

Anybody who's done time know power is real. I'm not really into philosophy and this thing about reality is an illusion just sounds so weird. Some hindus or buddhists say we're all like dreaming, and life after death is the real reality. This reality is real for me, can it get more real than real?

I read psychopaths can't have real insight and everything a psychopath says about philosophy is pseudo and faking. I've been diagnosed too, in prison. And it never really hit me what it was that made them call me psychopath. But I've never been into philosophy. Not yet anyway, hehe. Maybe now when I have to lay low.

I think this is a really good blog and I've gotten interested in my own diagnosis. I actually find it exciting because there's so much to do with more knowledge. Your blog is great because you've done all that work and all I need to do is read on.

It's impressing that it always hits home what you write.

I'm with Hank here. You are helping me to discover things about myself, that HAVE always been there, just haven't been able to explain it.

It would not surprise me if you had just read the Buddhist Diamond Sutra before writing this entire article. If you have never read it, I highly encourage you to do so. It in a much more lengthy dissertation, but equally compelling, says nearly exactly what you are saying. In summary it says, "All concepts are illusions."

However, this is relative to the fact that we use our minds in order to conceive, comprehend and understand. It does not say that reality is not "real", but rather it says that any "concept of reality is not real." Yet, we do admit if we take on the role of philosopher, that we need words and concepts to express our views, share our experiences and so on in regards to reality.

Once we begin to do so, let us take a look at your main topic, Power. It does seem pretty obvious, if we look at both science and nature, that Power is real, in a relative sense, when you compare two things and their intentions. When gravitational pull is strong enough, even a large planet can be lost to a black-hole, or a large planet can absorb smaller planets. The explanation of moons, planets and so on has much to do with the "Power" of the gravitational pull of the planet. People seem to have a sense of "pull" in life too, maybe in some form of energy that is more difficult to measure using scientific tools.

It is my observation that empathic people can be more easily manipulated in certain cases because their emotions are used like cords, to pull them around by. However, while they can be led and used, if the source of the pulling (ie. a psychopath) has no empathy, merely interests and curiosities (abuse, harm, personal gain, sexual gratification, etc) then is it really a display of Power in the same sense as the planets example? It would seem it's a different.

For example, if a person has an empathic cause, say philanthropy, to raise money for children with Cancer, and other empathic people hop on board because it pulls to their empathic senses as well, wouldn't this be more similar to the planetary example of Power?

I'd be interested in your thoughts on this simple example.

Power and love are illusions so much are you are referring to them as things, in the sense of a noun. They are quite real if you are referring to them in the sense of a verb, or action. If I love you and I jump in front of a moving train while pushing you out of the way so you won't be crushed then I have just demonstrated my love in a very real and concrete way. Not in the the dreamy eyed "I love you baby" which can be an illusion. If I hold you down, (physically) because I am physically stonger than you and I tell you you can not get up until I allow you to, then I have power over you. I have just proved my power to keep you down until I was ready to release you. So power and love CAN certainly be illusions. They can also be very real, tangible actions one physically experiences.

then you're delusional about the level of power you possess, no?

"If you now say that I twist words because I'm a psychopath and you need therefore not consider my arguments, you are certainly giving up power freely. It is in your power to do so, and I cannot be blamed!" What a crock of shit lol

Why is it a crock of shit? It makes sense to me. People twist words all the time and he's right. When they find out you're a psychopath they'll do it almost automatically. Like they think you can't ever say something that's actually the truth. Not so.

So call me a Philistine, I love exercising "power" illusion or not; Even though power may be an illusion put out to put some definition the null of existence itself, I use it to evict useless tenants into the, most certainly real, damp streets.
Honestly, I do not know if this anecdote is a feeble attempt to defend the reality of "power", If I started to try and cherry-pick one illusion over the other I would only be deluding myself. Regardless, illusions are great fun; Just ask the loser video game junkies how fun their illusions are; Actually, their illusions end when they press the power button off, my power illusions power off if I go to jail. Some illusions are more potent than others?

Weakness is an illusion..

Love is indeed an illusion, guess there's a first time for everything Zhawq.

With regard to video game junkies(-bSodmin's comment) a 'friend' tells me many psychopaths fall prey to this. I replied that video games may have been invented by "empaths" as a protection device, because it provides a safe place to indulge sadistic impulses.

this all seems like a case of half full half empty, an important insight coming from the illusion paradigm is that all illusions are decisions, you can thus curate yours and any other persons illusion unto what ever end (one hopes it would be used for mutual value add)