How Are Psychopaths Without Social Masks? (Part 2) 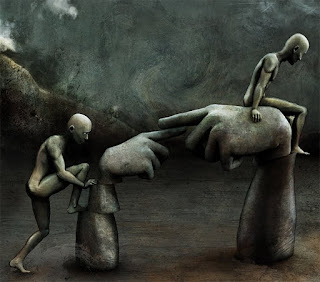 
Would you prefer to writhe and hump with abandon, or do you WANT to have access to us? How about if we released ALL from social norms and let us have a chance to point a finger at you and say you are evil? What works best for you?

For a psychopath having not one, but an unlimited number of social masks that we can wear in different social situations according to the various Social Norms, will always work best. I think I can say without a doubt that this is how it is for the vast majority of psychopaths. In reality there are nobody who have unlimited numbers of masks, for even psychopaths are influenced by our culture, background and education... only not to near the same extent as neurotypical people are.

A psychopath will definitely "WANT to have access to you". Of course we do!... But it isn't prejudice that makes me I say that this is not only the case for psychopaths or antisocial people in general. Normal people too want to have access to each other! I'm also not being too harsh when I say that the hatred toward psychopaths doesn't all stem from being victimized, a great deal of it is based on good old human envy... on being bitter because the skill at "gaining access" to others, that psychopaths are so known to have in excess, in most normal people is lacking in comparison.
We can safely say that the origins from which the rage against my minority springs are not one-sided.

Being released from all social norms wouldn't be good for anybody... not for the psychopaths, and not for the mainstream majority or other minorities (1*). Social rules - also with a precise and descriptive term called the 'Social Contract' - defines what a great part of being human involves, and without it we would be in trouble... And I'm not talking about trouble with the psychopaths. I'm talking about trouble as a species, we would be unable to communicate, reach mutual understanding on any level. There would be no common code or norm for politeness to guide us when we meet someone from a foreign country, from a different part of town, or even our next door neighbor. How would we ever make business relationships and contracts work? We would be at war with everybody because we would have no 'social sign language', which is crucial in all relationships, but even more so between nations who don't share the same mother language.

As for the pointing fingers at us and calling us evil... That is something most psychopaths - myself included - have experienced many times in their lives, often from very early on in life. We are not born with the knowledge and understanding of human psychology or the group specific social rules that allows us to befriend people, get hired for jobs that we have no prior experience with, impress the lady we met at a friend's party and perhaps make her fall in love with us, etc. In that respect we're like everybody else, we start with some natural talent but otherwise have to learn the hard way through trial and error.

I will tell you a little secret that I know few psychopaths are keen to share: Most psychopaths have in their childhood experienced being disliked, feared, scorned, avoided, and some (not many, but a few) have even experienced ridicule and mobbing. Psychopaths rarely get mobbed (as far as I am aware of), but social alienation from very early on life is very, very common especially for psychopaths who are heavy on both Factor 2. and Factor 1. traits.
A young child cannot fake emotion as skillfully as an adult who have studied and practiced throughout adolescence and early adulthood. In fact, just as normal people will keep adjusting and fine tuning social skills throughout your lives, so do psychopathic individuals keep studying human behavior and work on being the best we can be at what we do.

I will touch on this aspect in future articles about my own childhood.

(1*) -With the exception perhaps of some highly intelligent, educated, mature and aware people who adhere to a personal Fundamentalist or Absolutist Anarchist ideology.
Posted by Zhawq at 4:53 PM

Why do psychopaths/sociopaths socialize? Even when there's absolutely nothing to gain. And when your friends ask for help, you guys help them, even when it puts you at risk. I read a lot that children that are psychopaths tend to be loners, so why do you need to go grab dinner with your buddy when you're in your twenties?

If I had to imagine a psychopath without a social mask, I would imagine a person whose gestures are affected by the "flat effect", that is, a person with very limited gestures, except for anger. Think about the Marlo Stanfield character on the drama The Wire: www.youtube.com/watch?v=gKkWXMb1TNk

When I was young, few friends went to psychosis when they came into "my world". I didnt know it then or tried nothing but it seemed that people that I let to come closer goes nuts. Maybe year later I understood that I am different ja few years from that, doctors told me that I am a psychopath. It freaked me out and I started to act like a "crazy one".

These days I admit I am what I am and wonder can I ever have a relationship and love in my life? I have dreamed about it so long in my loneliness. I know it can never be with "normal human" because when there will be problems it is too easy to blame me about everything and make me angry. Some other psycho, perhaps? Enivei, we deserve love too. People can say what they want. It doesnt chance the fact.