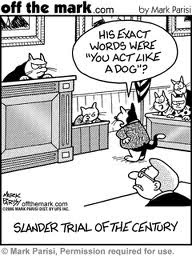 A few individuals have for some reason become very upset with me. They furthermore do not seem to understand that I will not allow slander, flaming & naming at my website.

I have to assume these individuals are out to do real harm, and they do not care who they hurt in the process as long as they can make others believe anything they say about me. It will not work for a variety of reasons, most of which I am not going to disclose. You will find out in your own good time.

Just so you know: You could be facing criminal charges if you persist in your attempts to hurt people related to me. But I will not be the one placing the charges, nor will I make the decision or participate in a way that you can use to find out who I am. You will still not know anything about my location or my name outside of the Internet - not before, or if, I decide to let those data become public.

I am not expecting you to listen, but some of my readers who might be taken in by your aggressive and seeming certainty pretense might think twice before they follow you, and they deserve that chance because they don't have my knowledge or insight in what drives your behavior and rage against me. I have given you a fair warning, and this way I have my back free.

But I will address my readers...

It began when I playfully addressed some faulty comments placed by two individuals at another website, and their heated throwing mud back at me. It escalated somewhat, and I am partially to blame because I let myself be dragged into an exchange where I eventually placed flame-like comments where I said what I actually thought.

Despite I never became abusive or attempted to slander neither these two, nor anybody else, and especially not people who might or might not have any connection to them or even exist, my thoughts were definitely not flattering.

Whereas they had thought themselves in the right to write comments to me in the same tone themselves, when I did the same to them they decided to turn it into something more.

Of course I know, when I create a website with a subject such a PW, I also know there will be people who will attempt to track me down. And I have taken precautions accordingly. I cannot be tracked... at least not by any private person. But like everybody else, I have to have some kind of "presence", if even a false one. This is what they have found.

Luckily most of the "identities" these guys have "found" aren't real, they don't exist.

However, there is always the danger that somebody could be linked to me accidentally, and this is why I take this so seriously. If it persists, I will have to take further action.


Now finally back to you, my anonymous readers... Use your common sense, don't believe blindly in anything anybody tells you on a website comment board - or even in the articles themselves. I am a good people-reader, and I know what to look for when it comes to lying.

And there are a few things to consider in this regard:


There will always be people who wants to slander and destroy things for somebody else. Especially so if that somebody else seems to have something that they do not.
I have always had a tendency to trigger envy in other people, especially people of the more sociopathic category. But it comes with the territory of being a strong personality who doesn't bow to the norms.

As my readers will be aware, there are certain very strong codes in the sociopath community. As you will also be aware of, psychopaths do not have an actual community, and we have no code - of honor or otherwise. We are just as likely to turn against each other as against anybody else. But sociopaths will often turn against us, unless we choose to conform to their norms.

Most of the time we DO choose to conform to their norms, for the same reasons as we conform to normal people's norms when we're in their communities.

But why have I chosen to frequent sociopath communities in the first place?... I have chosen to do so because that is where I find people who are interested in psychopathy, and it is also where I find young psychopathic individuals who may want to learn more about themselves.

In order to signal that I represent a minority within the minority, I chose to not conform to the sociopath community's codes right from the beginning, and that of course gave me some negative attention. Luckily I do not react emotionally to negative attention like others - sociopaths included - do, and so I let it be, until comments began to turn slanderous.

I will end this article with this...

Don't worry about me or the persons who have been linked to me. They have not been harmed, nor will they be so.
Every individual who have been named as connected to me, knew this could happen before I created PW, and even so they gave me permission to go ahead with the project. I have kept nothing from them whatsoever, and they are aware of everything that has happened over the past few days.

It was on their own initiative that they wanted to help me with my project because they believe in my idea and in the importance of what I am doing.

Thank you to all of you who have supported me and who have kept believing in me in spite of all the latest events.

If anything, it shows what I have said from the beginning: It is not I who am out to hurt others, in fact I attempted to stop when I realized these people had taken things into the actual malicious intention of destroying my presence and my work with Psychopathic Writings. And I once again thank my paranoia for being foreseeing enough to take precautions from the start, it is because of this that I and my friends and supporters are safe today. I can continue my work!

Ps. I have found it necessary to block anonymous comments for the time being. But eventually things will turn back to normal.
In the meantime, I am still available for emails, of course.
Posted by Zhawq at 10:31 AM

This post makes no sense on so many levels.

it's not very warm around here anymore. But when summer gets really hot, I usually take a dip in the swimming pool, preferably with a lovely lady to keep me company and keep my mind on more pleasurable things.

I don't suffer much from heat - nor cold, for that matter. I find the pleasurable things in all situations. Life quickly becomes an ongoing battle against every little annoyance if you let the negatives distract you, and it's a waste of energy and time when there's so much fun to be had.

another day and another sandwich... Have you tried pita-bread? Toast it, stuff it with meat, or something else of your choosing, and eat while still warm. I like it slightly crunchy, it's delicious especially when you're really hungry.

You ask how I think it feels to be raped. I take it you're thinking about prison? Well, I don't know, I was never raped - in prison or elsewhere. I've witnessed it taking place in prison, but that's it.

as I've stated earlier, I don't freak out when you post slanderous comments. I delete them, that's all.

Fuck em, its a silly man who fucks with us