Psychopath vs Normal: Being Startled. (Part 2) 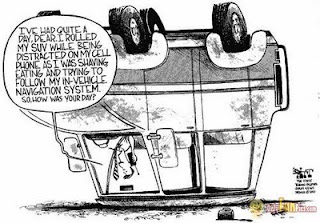 After writing in Part 1 about how surprised I was to read Ronson's description of an allegedly very common physical response that followed after he had been startled (by a picture!), two pages further into the chapter there was another description relating to the same kind of emotional experience. An hour or so after the first event, at the end of the three day long "Psychopath-Spotting-course", Ronson describes how he and Robert Hare were heading towards his car:


[Hare] saw it before I did. A car was upside down. The driver was still in his seat. He was just sitting there, as if good-naturedly waiting for someone to come and turn him right way up again so he could continue on his journey. ... I realized he wasn't conscious.

A little later they're sitting in the car:

'Jon?' said Bob, after a moment.
'Mn?' I said.
'Your driving,' said Bob.
'What about my driving?' I said.
'You're swerving all over the road,' said Bob.
'No I'm not,' I said. We continued in silence for a moment. 'It's the shock of seeing the crash,' I said.
... Bob said what was happening was my amygdala and central nervous system were shooting signals of fear and distress up and down to each other.
'They certainly are,' I nodded. 'I can actually feel it happening. It's very jarring and jaggedy.'

I guess my jaw dropped once again, but this time I became suspicious: "C'mon, this is just not very believable!" I thought. "Are you playing a trick on your poor readers, Mr. Ronson?" I half smiled. But the truth is I really don't know what to believe anymore... 'Jarring' and 'jaggedy, jangly, prickly, weak' and 'debilitated'? And those are all because of seeing something, not being in danger, not being at risk in any way, just watching a picture and then an unusual scene from a distance.

With the description by Ronson above, and other descriptions by neuro-psychologists that suggests some of the same things, I am no longer quite as certain that most people feel exhilerated in the same way that I always do when something really extreme and dangerous happen in front of me.

The human psyche and neurological reactive patterns are certainly more varied than I had ever thought. And to me it is a wondrous thing, it makes the world much more interesting and much more full of potential for new and great things and ways in the future.

If my personality type was to become the norm I would do everything in my power to make sure that those, who we now call neurotypical and normal because they are in majority, would never be stigmatized the way that my kind, the so called psychopaths, are. The normal may not be very effective in situations where effective and immediate action is required, and they may have problems with their emotions and the way they often are ruled completely by what they 'feel' rather than by intellectual logic, but the world would be a less interesting place without them. They're here for a reason, and everybody have something they can give the world, just don't let the mediocre rule and decide what is good and right, for they're clearly not equipped for this task!

...I've witnessed car crashes a couple of times in my life. On two occasions I was very close to the scene and saw everything right in front of me. - More about that in Part 3...
*
Posted by Zhawq at 9:48 PM

If it helps at all, I think that us neurotypical people respond so strongly to such events because of our ability to feel empathy. When we see something like a car crash, we imagine what the victim is feeling, and are harshly reminded that the same thing could happen to us.
That's what produces the startled reaction, not actually being in danger. If I were in Ronson's situation, I think I may have had a similar reaction, although maybe not so extreme.