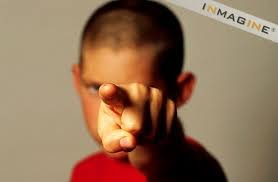 An allegory: Psychopaths see normal people as a very special, if plentyful, breed of dogs which demand careful treatment due to their very special racial traits that you have to become a dog expert in order to know how to rear correctly, but if we do it right we get unique dogs.

Psychopaths are no different. To normal people we are the special breed of dogs which demand careful treatment. But it is with this as with most in the world: If we learn about it from early on in life dealing with dogs becomes like second nature.
Do we label Pit-bull Terriers as evil? Strange as it may sound, Pit-bulls are outlawed in some countries. Now should we outlaw Pit-bulls altogether? Which breed will we outlaw next? The Rottweiler seems a likely choice. And then ...!? - I think I've proven my point and stretched the allegory all it can take for now.

Being antisocial is not part of our nature, it is something we develop in our experiences and interactions with our surroundings, and it begins early on in life.

So yes, Robert Hare is right when he says psychopaths use what we learn to our own benefit and against the benefit of others, IF we're antisocial and don't have the understanding that I think I can claim I have at present (my nature will never change, that's not what I'm saying. I will always have to fight urges and use extra energy on keeping myself in check, not lie, not abuse, etc., but I have other traits as part of my condition that allows me to change my ways to such an extent which would probably be impossible to non-psychopaths). That the notion that psychopaths should be kept from learning about ourselves and about others should be extended to also mean that we shouldn't learn anything at all right from the beginning will be the greatest mistake that society can possibly make.

I say this as a representative of a group of psychopaths who have in fact been brought up under such conditions, with knowledge about all kinds of things being withheld from me, and I can say right away that if you really want to keep us from learning anything right from the beginning, from we're children, then you have better isolate us completely, especially if we're intellectually gifted. For we WILL learn! There's no way you can avoid it! And our antisocial traits will only become worse with time the more you keep from us! Come to think of it, completely isolated is not far from how I was brought up, and I learned even so. So 'completely isolated' should probably be in the context of a maximum security prison for infants.

As I have said all along, from the start when I first launched the Psychopathic Writings Project: In spite of all the 'bad' things I've done - having been mentally and physically abusive, having broken people down psychologically until a few committed suicide, and even having killed on three occasions - I do not believe I'm a bad person! I did what I did because it was the best I knew how to do at the time and in the situations I was in.

And yes, I do need a lot of stimulation, but this is not being acknowledged, so I must see to it that I get it myself. How can you expect me to acknowledge your needs and your feelings when you do not acknowledge mine? Who are you to say my need for stimulation is worth less than your need for love? Who are you to decide which is better or which works best? The world as it looks at present doesn't bode well for the neurotypical, normal human being, why don't you look at your own flaws and investigate possible uses of those who are different from you? Your arrogance can be your undoing!

The human condition is a spectrum, and psychopaths are human. We are here for a reason, just like the rest of you!

Who's notion is it the psychopaths should be kept from learning about themselves?

For me, as a child, I didn't understand a lot. I learned, fast, but there were a lot of hints that had to be pounded into me.

The, "would you want another person to hit you?" question would have been a simple answer if it wasn't rhetorical. I'd love it because that would mean I could hit them back. I loved fights. I probably still would if I could get away with it as an adult.

But I agree, love is just another form of stimulation, and my stimulation is important too, dammit!

Personal experience tells me that, even though I'be found better ways of achieving my stimulation, for children its tough. Then again I was very lucky, I had a very nurturing family that believe I'm just a loner.

I have some questions.

First: Why are you doing these? why write these lines? what is your main goal?

Second: I kind of strange but serious question: Can you grow a beard or a mustache?

Third: Have you ever think of Psychopathic personality to be a kind of human evolution?

I think I might be of help. Please answer.

sorry for my englis if there are any mistakes.

^David,
The beard/moustache question is intriguing . . . . .

knew one whom couldnt grow a full beard: only a moustache and goatee - nothing grew between side burns and chin

it is a common notion that psychopaths use what we learn against others, that we become better at being abusive. They don't realize that it's not because we learn, but because we don't learn enough and our needs aren't understood nor respected. If you don't receive respect, how can you be expected to respect others?

why can't you get away with fighting as an adult? There are people in all groups of society who fight with more or less sanction from the rest of society. There are always ways, if you really feel this could be an outlet for you. Don't let conventions hold you back, you're too smart for that!

I would love to learn more about your background. So if you feel like it, I'm listening.

I will not answer your first question. At least not here and now.

I can grow a mustache. But I've never put an effort into it, so it'll not be a full or heavy one.

I have thought of psychopathy as a form of human evolution. I think it plays an important role in this regard, yes.

It is true that not all pittbulls are bad dogs. But the ones that have murdered, attacked and so on, should be put down, in order that theycan't ever do it again.
They've lost the right to being treated as an living being when they did those things.
You've lost the right to be treated as a human being when you started acting like a monster. Monsters are created to, and in essence, it's sad. But, just like cancer, they have to be removed in order to let the human that is attacked by the cancer, survive.

"It is true that not all pittbulls are bad dogs. But the ones that have murdered, attacked and so on, should be put down, in order that theycan't ever do it again."

So when do you kill off all the troops returning from War ? In your eyes, anything that kills a human, needs to die so it won't happen again.

So with your logic, lets gas the prisons and kill all people that have killed.

"You've lost the right to be treated as a human being when you started acting like a monster."

I was born as one (in your eyes) so are you saying that anyone that doesnt think like you, should be killed at birth ?

And why comment on a board like this, when clearly you have no understanding of how the mind works or is wired in people that are psychopaths? Maybe this made you feel better ? Airing your misunderstanding on the topic ?

If that was the case, impressive!