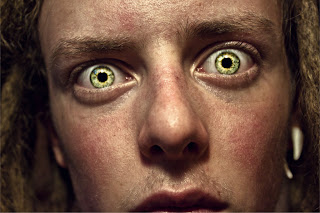 Next time you find yourself dealing with an individual whose nonverbal mannerisms or gimmicks--riveting eye contact, dramatic hand movements, "stage scenery," and so on--tend to overwhelm you, close your eyes or look away and carefully listen to what the person is saying.

The above is advice from Dr. Robert D. Hare.

I can't count the number of times I've met psychopaths trying to do this kind of thing. These are typically the more simple minded and unintelligent, but of course, like all psychopaths they think they're brilliant where in fact they're so transparent it's laughable. On the occasions I've encountered them - and yeah, they'll attempt to play even other psychopaths, for they're so stuck up their own asses and don't see anybody else but themselves (ref. some of the idiots at some of the comment boards on other blogs kept by, or about, psychopathy/sociopathy/AsPD, who like to tell us all how pathetic we are, that we're 'posers' and that they're the only 'real' sociopaths ('sociopath' is the fashionable word that these mud-brains like to associate themselves with now adays).

I can recall one incident... I must've been about 12, and I had just arrived at the central railway station in my state's capital city, and I was now looking for somebody I could approach and hopefully convince to take me in, give me housing and pay for my meals and clothes, etc.

Some psychopaths make their living by hanging out where out-of-state people and tourists first arrive, looking for someone who is lost so that they can play the helpful friendly guy and bleed them off of their possessions and money.
Now one of these guys had spotted me, so he came over and began talking, following and keeping very close to me, doing what is referred to as "intruding on your personal space". When someone does this they position themselves so close to you it is difficult for you to look anywhere without looking at them, or to turn anywhere without turning directly towards them.

My reaction was to look away and past him, I looked around at everything else but him while I turned on a look to signal to him that I really was not interested and that I was very, very bored. But as is so very typical for this type of psychopath, he wasn't very good at reading people. - These idiots may 'seem' good at reading people, but they're not. What they do is really nothing more than follow a few very simple techniques that work only on the very insecure. They never rise above petty cons and pickpocketing.

Anyway, he failed to see my bored look, so he wasted more of both his and my time, virtually creeping all up into my face while he kept talking and talking and talking, non-stop. Even though I couldn't see his face clearly, I could see his non-blinking stare out of the corner of my eye.

In a sense I automatically did what Hare advices, but I did it instinctively. I certainly didn't listen to the guy, though, and definitely not "carefully". I already knew what he was saying, and all he did was repeating himself and adding a few more "persuasive" details about all the great things he could show me and help me with, and that I of course would be lost without his help wherefore I needed him.

He eventually realized I wasn't the easy prey he'd initially taken me for (no doubt due to my obvious youth), and at some point he silently withdrew. I had my own attention on the subject I'd already chosen before the idiot came over, so I didn't see if he showed any signs of irritation or disappointment when he gave up. My guess is that he's not shown much of anything as he saw he only partially had my attention, so he probably just left - or maybe he spotted another, more promising subject.

So it can attest to the fact that at least some of Hare's advice will work, but I don't think a more intelligent psychopath will be dissuaded  so easily, and most people will also not be able to keep pretense up when pressured by a very insisting behavior from someone who stares at them intently. I can do it, and easily, but I'm in a some ways like these people and know how they think, plus I don't get intimidated or insecure. It's just not in my personality or psychological make-up.

This story is about one aspect of the infamous psychopathic stare. But there's apparently more to it than what one can use decisively.


However, there's more to the psychopath's cold stare...

Ahh, the infamous psychopathic 'stare'. Some people watch too much television.

Coercion involves many variables, many techniques, many strategies. Based on a situation one tactic could be brilliant that would otherwise be foolish. A cold stare could be effective to the right person in the right situation, but in most instances it's absurd.

The problem with some antisocials is they spend more time acting than thinking. Instead of analyzing a scenario and determining an acceptable route of action they simply try the same old methods in every trial.

Have I used the 'cold stare' to control someone? Sure. But not before I have corralled my prey into a position where it would be useful. In my experience, the most relevant time to use such a strategy is when you are already in a position of power, and the goal is simply to make your job easier.

For instance, a dog is coming toward you, you may notice that if you get into a somewhat crouched position, the dog will as well. You are at an impasse. You want to capture the dog; you can either attack it outright and possibly get injured or you could catch it in such an assured, non-threatening way that no violence erupts. Either way you are getting the dog.

By giving the dog a steady, blink-less gaze and moving slowly you can often ease up to it. If you were to move jerkily it might snap at you. This is the same with humans. If you are not in the right situation this would be useless.

og,zkm, you are asking for trouble if you do not blink with a dangerous dog. Always blink to show you are friendly.

Ignore the details, pay heed to the point. I didn't want to get into a rant about the psychology behind why certain facial expressions (ie. 'the stare') work the way they do. These are the kinds of things explored in behavioral science.

All animals have certain 'set' responses to certain stimuli, including humans. These are subconscious reactions that we in modern society are generally no longer in tune with.

The point of my hastily put together example was that you were not trying to pacify the dog or submit to it, you were trying to dominate it with a lower chance of violence needed. And really let's be honest, I wasn't really talking about a dog, was I?

Really my point with manipulation techniques always seems to be, there are many methods and it's important to choose which is most prudent. I have spent a lot of time studying the effect various actions have on others' responses because honestly, I need them to communicate semi-naturally.

Am I saying glaring at people all the time is a smart/good/effective idea? No.

Yes, clearly here seems like a perfect place for you to be 'cool'. Is it so hard for you to find someone to victimize in somewhere off-line? Here is the attention you wish, congratulations. You are really aggressive and inferior! How nice!

The rudeness of normal people are not fun at all. Just inferior, boring, seriously lacking creativity, pedestrian, why do that?
The only sin is mediocrity!!!
Don't you agree zhawq?

seriously? The anon above is Bella. If you do not know me, let me introduce myself to you. Hello.

In no way shape or form do I have a desire to exude "coolness" here or elsewhere. i wouldn't know how to go about doing that.

what is so wrong with a mediocre comment? Am I going to get arrested by the comment police?

Please tell me what is rude about me? I know a few things: I often pick up on a small detail and relate it to my own life, forgetting what the bigger point is, forgetting the thread? I have a tendency to do this, and to blurt. You think this is because maybe I want attention? Well, perhaps that is part of it.

All I'm sure of is that i enjoy being with people who have an ability to break down behavior in way I can understand it so that I will NoT be rude, and also so that I can identify rudeness in others.

I believe it is a narcissistic quality to always be looking inward. Maybe I should go somewhere else, where all the pleasant narcissists go?

Maybe Zhawq, the Shark, has one in mind for me?

I believe it is a narcissistic quality to always be looking inward.

Well, I'm not sure it's as simple as that. But it's something I'm looking into at the moment.
There's no doubt that psychopaths have some narcissist like qualities, but our reasons for these kinds of behaviors are different than they are for narcissistic people.

I'll be writing more about this aspect in an upcoming article.

Maybe Zhawq, the Shark, has one in mind for me?

You should know better than to think I will tell anybody to go elsewhere, Bella. I appreciate all my readers, and you're one of them. ;)

Can we have a glimpse at what such famous psychopathic stare really looks like? I fancy it looking like Yoko Ono's and Elvis' stares on this page:

Am I spot on? Thanks.

^lol, lele
you don't really believe that whacked out conspiracy theory stuff do you ?
It is good for a laugh though I must admit.

I can recall similiar situations in my childhood where petty mugs tries this and I instinctively looked away and tuned my behaviour to rebuff it.

I can also recall also having an affect on people, I don't really do it deliberately, but before long they are seeing my side of the story, saying things and thinking on ways they wouldn't normally. They start forgetting like I do and everything, and I remain clear headed. In a nutshell, when my family members realise "I'm doing it again" they look away and close their eyes, it breaks them free pretty quickly. I'm not sure about the specifics of how I do it, but maintaining their attention and I suppose, directing their energy where I want it is the name of the game. Jedi mind tricks I call it.
I think its the same as the intimidating stare in a way.