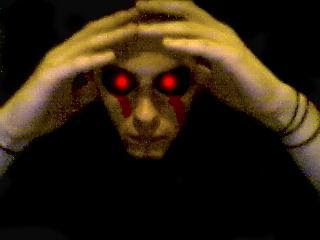 'Staring eyes' is a trait that has become intricately linked to the word 'psychopath', but it seems to be generally associated with the mystical and menacing, that which we aren't completely comfortable with, but also which we have a deep fascination for. I remember hearing about the 'cold stare' of many a villain long before I was connected with villainy myself.

We can probably all recall experiences of some funny situations and games from our childhood or youth where we would try and make the most distorted facial expressions we could as we imagined what 'crazy' or 'insane' people look like. A 'staring gaze' was always an important part of the performance, just as it was when we tried to imitate what we imagined a hypnotist looks like when he is about to hypnotize his - unknowing, of course - victim, or a vampire when he is just about to sink his teeth into the neck of his prey.

Somehow psychopaths and a staring gaze have become linked in the same manner. I find it in the descriptions on various websites and blogs - such as this one - given people who know or lived with a psychopath, I find in the wordings of "victims", and I find it from time to time in the descriptions from people who ask me about people they have met and whether or not they may be a psychopath, as in the following quote:

Three weeks ago I met someone at a bar downtown. He's the most interesting man I've ever met, and a gentleman. He totally fascinates me when he tells me about what he's experienced in his life, he never gives me any details I can check up on, but somehow it doesn't matter because he's so lively and interesting, he makes me feel like nothing else matters because he's there and he's interested in me. Actually he proposed to me yesterday, and that's why I decided to write to you. He turned up at my work and proposed right there in front of all my colleagues. I know he meant it and it came from his heart, but somehow it made me feel awkward because I wasn't ready to be committed so soon ... Do you think that was wrong of me? I wanted to say yes with all my heart, but my brain told me I should wait. so I hesitated and the situation became awkward and I think I may have disappointed him. ... I didn't really think about it the first night when he first contacted me in the bar, but when we had dinner the first time I noticed he had a funnny way of looking at me, I don't know how to explain it, it's like he has this kind of unmoving stare. I know it sounds strange but it's not really creepy or anything, it's just something I noticed and at first I thought it was because he was in love with me, that he likes to look at me. But when he proposed to me yesterday it just somehow felt different. How can I explain. ... I mentioned it to my room mate and she told me it was the look of a psychopath so I did some searching on the Internet ... Then I found your website ... Do you think the guy I met was a psychopath?

I wrote back that there is a possibility that he's a psychopath, and that I say this not only because of the description of his gaze; there're other things that suggests he may be a psychopathic individual. But I will have to know much more about his behavior and in much more detail before I will even attempt to give a statement in that regard. Of course she is also aware that I don't have any official education that allows or gives me ability to make assessments. We're presently having a correspondence.


There're also a few of the psychopaths who have written to me who mention they've been told they have a 'stiff stare' or 'empty stare'. I also still come across articles written by clinicians and professionals who mentions in their listing of traits to look for, that we, psychopaths, tend to "hold people fast" with our stare, which is also what the reader who wrote the above quote spoke about.

So the notion is alive and well. But psychopaths are not insane, we're not vampires, and we can't hypnotize people on the spot and against their will. Yet we're categorized with these, and I think some of the answer to why that is can be found in that to most people, and even to scientific researchers, there's still a air of mystery around us, we're still not completely 'figured out', mapped and defined. And the non-existing connection between psychopaths and insanity still flourishes in the common imagination. But the question is still: Where does this connection between us and a staring gaze really stem from, and is there any truth to it?

As I will show in the second part of this article, the psychopathic stare is far from just a urban legend.

I want to watch a video, or at least picture of psychopathic stare. So, how is it like? Curious.
-Yeonji

It is like looking at a shark's eyes, Yeonji.

When he/she smiles at you in the midst of sizing you up, the eyes do not smile back. There is a lack of depth. It is the only way to describe it. It is a thinking, hyper vigilant look. And it is wide.

They can hypnotize on the spot if you are willing. You must absolutely be willing. It takes a lot of balls to be in a relationship with one of these people. Holy shit, you're constantly asking yourself. "Hmm now who am i again? Oh yes, I'm the person who would never agree to that. I forgot! Silly me." You CANNOT ever forget who you are. You can lose your entire identity.

I'm going to post a picture in one of the coming articles of a psychopath who has these kinds of eyes, and when he does the stare.
But it's possible you won't be able to see it for what it is. It's very different on a still than from when you're right in front of someone.

what you say here is spot on. In fact, that's the meaning of my nick. Zhawq is a re-writing of the word Shark.
I'll go more into this in an upcoming part of the article.

you're right. Hypnosis is reality, but only if the subject is willing. There are ways to make someone unwilling willing, though. But if you want to make a more profound change in a person, it does require time. You have to get to know them in more detail than you possibly can on the spot.

You CANNOT ever forget who you are. You can lose your entire identity.

This is key to not being controlled. It is also the reason why most people are relatively easy to control if you're willing to do a little foot work in order to do it.

Knowing oneself is not an easy thing to do, and most people today loose a lot of their contact with their individual self early in life.

Yes, and when an adroit predator sees you already have been lost a bit, he/she has the ability to reset your dials to their liking! It's good to have friends who know you well. They will see you transform in front of their eyes at the whim of the predator, and hopefully they will be able to yank you out of harm's way. This is why one must never isolate themselves when involved with one.

" most people today loose a lot of their contact with their individual self early in life."

Zawq, this has hit me very hard. I should write something at least. I will feel better if I do. Thank you for the inspiration. I feel lucky to be able to process your clear words in a way that will eventually cause me to feel better.

This is why one must never isolate themselves when involved with one.

It's true that isolation of the subject is one of the main techniques used. Good friends can be the one thing that will 'help' you avoid transformation, if this is what you really want. - And I guess this is what most people would prefer, so in that sense you're right.

This is good hear. I hope I can continue to be of inspiration. Thank you for your words!