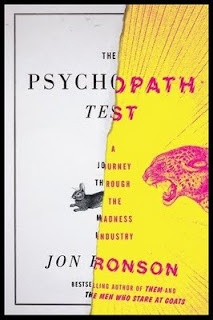 I've been reading a little further in my new book 'The Psychopathy Test' by Jon Ronson, and so far find it very entertaining. It is a story about a journalist who coincidentally becomes interested in learning about mental disorders and madness, and about how they influence the world we live in, society and possibly politics and economy. He sets out to find out about mental disorders in high places.

The reader is taken on a journey through a number of visits to and meetings with different people and places, and we are being presented to the leading definitions of the Normal, of Mental Disorders, and of Madness, of the our Western Society at our present time (during the late 2005-2010 AD). Ronson keeps a light tone throughout his description of events that seem to have actually taken place, though I think they've probably been altered slightly for the sake of entertainment consistency, which so far he does very successfully.

While to me Ronson seems experienced and confident, he describes himself in a way that I imagine most people will recognize and find familiar. I suspect Ronson exaggerates somewhat, I don't think his insecurities and weaknesses are quite as significant as he describes them. But I can see why doing it this way gives him a "rapport" with (most of) his readers, making it possible for them to relate to him and understand his messages on a direct and instant basis that bypasses the need to intellectually process the text word by word. This is important for a book with a story that builds largely on commonly known daily and lifetime emotional experiences, without which the 'Message', or 'morale' of the book (if there is one) might not make sense.

I see such little alterations of facts as artistic freedom and creativity, and I can almost translate it directly to what I am doing, only I do the process in reverse so that where Ronson is "lying" a little bit in cases where it doesn't destroy the content of the facts - like I have been doing most of my life on a daily basis - I now do the opposite. I am keeping the facts intact even when before I would have naturally altered them so as to make them fit into an idea or a purpose.


At p. 33 he has bought a copy of the DSM-IV and have looked it through. He writes:

DSM-IV-TR is an 886-page textbook published by the American Psychiatric Association that sells for $99. It sits on the shelves of psychiatry offices all over the world and lists every known menral disorder. There are currently 374 known mental disorders. ...there was nothing at all in there about psychopaths. ... I wonder if I've got any of the 374 mental disorders?

It does seem somewhat odd that a manual which covers so many so called mental disorders - among which I can think of several that seem to be little more than excuses to label something and thus acquire a little more power along with the ability to make a few more billion dollar on some new medication that naturally will have to be developed - somehow manages to miss the one disorder that defines the most powerful and evil 1% on the globe! But that's a subject for another article.

Ronson soon finds out that indeed he has not only one, or two, but several mental disorders:

I opened the manual again. And I instantly diagnosed myself with twelve different [mental disorders].

General anxiety was a given. But I hadn't realized what a collage of menral disorders my whole life has been, from inability to grasp sums (Arithmetic Learning Disorder) and the resultant tense homework situation with my mother (Parent-Child Relational Problem) ... (Caffeine Induced Disorder) and avoiding work (Malingering) ... There was Nightmare Disorder ... I was much crazier than I had imagined.

In the next chapter I will follow a Ronson in disbelief on a visit to England's most infamous institution for the Criminally Insane. It is called Broadmore Psychiatric Hospital and is the place where they send...

[...] the pedophiles and the serial killers and the child-murderers, the ones who couldn't help themselves.

Disbelief is something I cannot feel about this type of situation which we're about to experience.

If this book proceeds in the direction I am hoping for, it is not totally unlike something I have been wishing I might be able to write some day. We need some opposition to the ever growing mania with creating new "disorders" out of every little sign of life and human spirit that is left in an already sleepwalking population.

I'm hoping the best. And the next chapter should be good!...

"We need some opposition to the ever growing mania with creating new "disorders" out of every little sign of life and human spirit that is left in an already sleepwalking population."

Cheers. I've been saying this for years. At the same time I do, and don't, understand people's obsessions with labeling every aspect of something. I realize it gives people a sense of control over things they otherwise I have no control over, but it's an illusion, and frankly, not a very useful one. Acceptance would serve them better than some arbitrary label.

I agree with all that you said about the plethora of disorders.

One thing that I would add is that people who have been diagnosed (or self-diagnosed) with a disorder often use that diagnosis to limit themselves, often acting in a way that they think is consistent with their diagnosis. This is of course a self-training, reinforcing cycle.

Any disorder has a very wide spectrum and it makes no sense to be black and white about what one is or where one sits on the spectrum. And, overlayed onto the spectrum are the intelligence, preferences, strengths and weaknesses common to all of the population. There are bright pyscho/socipaths and and dim ones. There are "successful" people and people that can hardly cope with life.

When you way up the direction of the world and the big picture, it is fucking nuts.