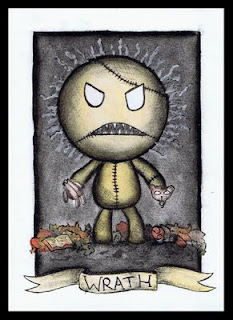 Childhood is an impressionable time in our lives. We'll never again later in life be as impressionable as we were during our childhood. But every once in a while, when the right constellation of circumstances and emotional susceptibility is present, we can be influenced to a degree that makes a lasting impression and change in our perceptions, in how we see ourselves as well as in how we see others and the world around us.

Sometimes uner such conditions it is the most silly notions that influences us.

For example, during the 1970-es a popular hypothesis was often discussed in the media. It had it that one of the main reasons that people get cancer is that they suppress their emotions, they don't allow themselves to feel what they feel. I'd imagine this is a commonly known concept - the suppression of emotions, that is, not getting cancer because of it.

However, for some reason it became a notion I'd return to whenever I was in a situation where I get overwhelmed by emotion.

"But Zhawq is a psychopath, how can he get overwhelmed by emotion?", you might ask. But there is especially one kind of emotion that can be overwhelming to me at times: Anger.

When I get really angry, and I am in a situation where I know it's a bad idea to show it. Another kind of situation is when I know there is nothing I can do to relieve my anger because it's focus is beyond me reach of influence. That therefore being angry in itself is useless since there's no outlet, no relief, and just feeling it will fuel it further; it's a vicious circle. These are situations where the thought I picked up during the -70s always pops up, and I think: "I could get cancer if I don't find release for this anger!".

Of course I know it's irrational and unfounded, and I know that I am not going to get cancer from suppressed emotions, if for nothing else then because I almost never have any suppressed emotions. I've made sure not to suppress myself altogether, mostly. And the very idea of suppressing oneself seems absurd to me, probably because I've not often been in a situation where I had no other choice. It must be horrible for the many to whom that is the norm, but to me it's slightly funny. And very ridiculous.

But because it's rare for me to not have a way I can relieve my emotions - especially anger and frustration - it's so much more disturbing when it does happen.

There is one issue in my life that has caused this kind of anger more than once. It began about ten years ago, when I was wounded during a fight in prison. I was stabbed at my thigh, and the wound became infected because of the un-sterile conditions at the prison hospital. This was before I joined the psychopathy research program, so it was while I was still in a normal maximum security facility.

The heart of the matter is that the wound, once it finally did heal, created some scar tissue that hinders my free movement slightly. Most people can't see any difference in how I move, but I can certainly feel it and cannot be unaware of it ever. To move normally I have to be conscious about the small of this old scar all the time.

Now there's a Societal Contract in the state where this took place that has it everybody who gets handicapped for whiever reason, may receive treatment and possibly surgery if such can cure the condition. Everybody knows my 'condition' could easily be cured, it could've been prevented altogether! But the useless junkie of a doctor denied me treatment, AND he denied me a second opinion!! This was in direct continuation after I first received the wound, and it went on for a year until I lost consciousness and went into a coma that lasted about 5 weeks. I was lucky to collapse during the hours when prisoners are outside and watched by guards all the time. Had it happened in the night, I'd have probably been dead by now.

I awoke in the prison infirmary, and the doctors there asked me wondering: "Why did you wait so long? You could've died! Surely you must've been in pain?". Oh yes, I'd been in pain alright, but I hadn't waited. I had been stopped and denied the possibility of getting medical help!

Next thing that happened in this cute story was another prisoner had drugs smuggled into the hospital ward and O.D.-ed in the bathroom. That be what it may, I'd have not cared in the least, but the motherfucker blamed it on me! Said I had given him the drugs! And the most funny about all this is that I hadn't even had any visitors, which means I could not have smuggled the drugs in! But the fucking idiots bought it (I knew the warden had a special hatred for me, that was no secret. It was one of these odd cases where someone just hates you from day one, without knowing you at all, and they'll keep hating you no matter what. But that's another story). He took the opportunity to deny me treatment, I was send back the general prison unit again without the surgery I was scheduled for, and was told that I could get the surgery elsewhere, all I need to do was fill in some formula and send it to hospitals around the country, and I'd get a special warrant to go and have it done.

So I began filling out formulae and sending them. I also had friends outside of prison do some research into the matter and learn what they could about what kind of treatment one coul get for this kind of thing, and they found it was being done routinely every day all over the world. I knew that, of course, not from research, but from logic reasoning.

However, I was refused on every single hospital that I petitioned. What was more infuriating was the reasons they gave me. Some of them actually must've thought I was retarded, because their reasons were laughable. I remember one of them denying me treatment, and I asked him to send me this decision in writing. But he said: "I can't send you anything, it's in the computer!". I asked him to send me a copy then. But he answered: "I told you, I can't send you anything, it's inside the computer! You can't get it out, it sits inside! You can't take things out of a computer!"... Right!...

This is the kind of thing I've been met with throughout my prison time.

Then, little more than two years ago, when I was released, I petitioned for a consultation as a free person, sure there'd be no more problems now that I had the same fundamental position as everybody else in society. But to my astonishment it made no difference whatsoever! I was being denied again!!

I immediately started a new petition to another hospital, and the case has been send forth and back and lost and been re-found, basically stalled, until about 10 days ago.

In the meantime, late last month I was at hospital for a few days. It was nothing big, and I knew I'd be out in less than a week. I've been in the same kind of situation numerous times in my life. The new of it all was what I witnessed: An old man, 84, had the very same kind of surgery done that I've been asking for for all these years, PLUS he had knee and double hip surgery ALSO!! He fucking nearly died because it was more than his frail body was meant to handle. But me, a perfect healthy younger man, I can't get even the smaller treatment!!

And then, when I came back home I received an appointment for a new consultation...

Repressing emotion it may not cause cancer, but it does cause denser, tightly packed bundles of emotion increasing the risk of volatile explosion. That might just be me though.

I took myself to the principle's office in 3rd grade. just walked out of the room. he called my mom, who claimed she didn't know about the bullying, so she said "If she wants to change her class, that's fine with me"

Zhawq! Your imagages for articles are always so wonderful! how do you find them?? Google search??

I used to be taken to the principles office daily for a while. Thinking back I can see they did give me special treatment. I was never really bullied, I was more shunned. Where I grew up people are very conservative, everybody must be the same. - But you mentioning bullying is something I've been thinking about. It seems there're a good deal of psychopathic folks who've been through at least some form of bullying or have been shunned, we just never talk about it, since it's a weakness. And we're all about control and power. I wonder if there's red thread here.

I Google search for my images. Sometimes it's a pain in the ass, I must admit. I start out giving it like 30 min., but it can easily take 2 hours. Most pictures are stock in some form, and that alone makes it not an easy task.
But it's good to hear you think they're good images. I hope those who made them are happy about my using them also. I do try to not violate rights and all that, so... Well. :)

Ha. I don't know why anyone with a personality disorder would NOT talk about bullying. C'mon. You either fought it and were punished or you took it and felt rage, or you did a bit of both and learned how to navigate through the mess. I grew up in a very diverse community, and I had shame big time. And yeah, my mother "dressed me funny". I was lucky. I was very lucky that I had some sense. I could have EASILY gone down a path that was more destructive. People are lucky I was more ashamed and less violent. Because i can still taste that rage. I think my entire life has been devoted to trying to fit in. Still. it doesn't ever end.

Repressing very very primal emotions, (basic human needs) is very interesting to me. The subconscious is amazing. And so very fragile. Is that why people go into psychosis? Can someone with the genes for psychosis just get a nice kick start into it because of trauma. (I think someone somewhere has touched on this subject quite recently, so forgive me if I am just catching up) Has anyone, here in particular, seen, or felt the essence of their own subconscious?