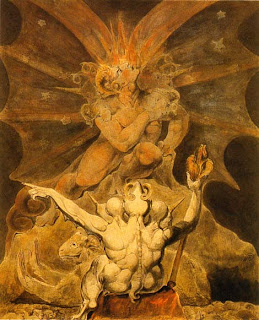 
The difference between objects and people is superficial. People - and that includes me - are basically objects. No matter how much we like to tell ourselves otherwise, objects is basically all that we are.

This is not an uncommon notion among psychopaths, and it is a very central theme in the discussion about the "Psychopath Problem".

It is up to us to decide how we want to treat objects, and that includes seemingly inanimate matter.

This is central to the problems man has created for himself. By thinking we're different from and more than not only inanimate objects, or from Plants, but also from animals, we've started a fundamental segregation that has pervaded everything we do and think. It has lead us to not only create global pollution and multiple variations of holocaust, it has lead us to even distinguish among ourselves, calling some people better or worse, more or less humane than the rest.

What I see is an ongoing gradual extinction of ourselves. And psychopaths weren't the first 'Demons' or 'Witches', we weren't the first to be given the role of 'Evil' and therefore the reason for all bad which must be eliminated or assimilated before Good can prevail.

We weren't the first, but what's more important: We won't be the last!... There will always be the next "mal-functioning" minority.

Hell, I can even predict who will be next! First, of course, it will be the Antisocial Personality Disordered, and then the Sociopaths (maybe both at once; they'll be attempted dealt with together with the psychopaths). But after that it'll be either the Borderline Personality Disordered or the High Functioning Autistic, especially those with Asperger's Syndrome.

With a way of thinking that distinguishes between Human and Inhuman, or Living Beings and Inanimate Objects, or Good and Bad or Evil, there will be no end until the last difference has been eliminated. And that can only happen by wiping the whole universe out, for as long as there is Life, so long will there be variety and differences.

So you see, that first seemingly innocent and self-given truthful statement is not as innocent after all. It makes the very basis for the progressive destruction of our globe which we're witnessing.

What makes it even more sad is this: The distinction between Humans and everything else is not a universal idea. It's religious. Furthermore it's Christian. That makes it slightly absurd that people take this idea for granted, while at the same time most don't believe in the Christian religion anymore. They may say they do, but in reality very, very few believe. It has become a dogmatic set of mores that nobody really know the origin of, but which they take for granted.

And that is the mores and the way of thinking that is behind the present debate about how to 'deal with' psychopaths.

I can't help but make the conclusion that the present craze about blaming psychopaths for everything - like thinking we're to blame for all the economical scandals, which is just an example - is basically a reminiscence of a 2.000 years old religion, and it's an excuse being used by the majority because they are emotionally dependent on 'feeling good about themselves'.

The irony is that they're succeeding in dividing those who might otherwise rebel, by painting the minority which are their present Scape Goats in the blackest of colors. Just like the Witches and Demons before us.

But let me end with going along with the idea that psychopaths are the source of all evil and not really human:

"Let those who have understanding count the Number of the Beast... for it is a Human Number! The Number is 666!..."

Interesting. I do believe you've actually talked about almost the same exact thing in an older blog, but I enjoy this read more.

This thinking is religious, but it's certainly not exclusively Christian.

As for Aspergers, they have a hell of an edge that the rest of us lot don't have. They've been thrown in with the Autistic lot, and when people think autism, they think savants or the severely retarded, both which bring thoughts of pity and admiration, thus I doubt the general public will ever turn on aspies wide-scale unless there is a hell of a campaign started against them. I really doubt it would be a successful one.

For me, my brain reacts differently when in person. i can't read a person on paper. That is usually when I see them as objects. Objects of desire,objects to play with, objects to fear, obstacles.. Whatever. I do Much better in person. I'm painstakingly careful when i email. It takes so much effort. i want to get the facts down, I want to be clear, i want to seem friendly. But all i really want to is give the facts because it's SO difficult to "come across" on the page. Once something's on paper there's little to do once you've pressed send. Drives me nuts. And I send a ton of shit just willy nilly. I don't give a shit half the time. The other times, I really really care. I am SO rambling here

Really? I don't perceive people too differently when not in person. I guess I've had some practice though. There are a lot of easy to spot tells if you know what you are looking for.

Notable, Zhawq, this is Bella, the anon above. today I feel different about what I posted up there above . So my view on this matter is inconsistent. Does that make me a liar? If you didn't already know that I am eccentric, would you steer clear of me in real life?

Are psychopaths really being blamed for all these things? I haven't noticed it being reported in the news at all. Although once someone has been caught actually doing something improper/illegal, it might be reported that the person has been evaluated as a psychopath. But I haven't heard a lot of general commotion about saying that everything must have been done by psychopaths. Of course, since I do not self-identify with this group, I may just not be noticing it. Can you give any specific examples?

Decipher Casey Anthony - because you can.

is that a challenge?

The aspie discussion seems to differ from place to place. I hear they're being pretty much treated as psychopaths in Northern Europe. I don't know if it's true, though.


Yeonji,
I read from some newspaper in the past,
that a person's brain reacts differently according to whether he/she is looking at is a person or an object.

That is true. But not for psychopaths. For some reason my brain give the exact same signal whether I look at an object or at a human being. - I can see the logic in this myself, I think it is more peculiar that most people see human beings as explicitly different from everything else. It's an interesting science (neurology).

What you said is interesting. I wouldn't be surprised if perhaps this is fairly common.

Bella,
Does that make me a liar?

No, it's human. People are not the same every day or every time they write a mail. Sometimes things are easier than other times, etc..
And no, I would certainly not steer clear of you knowing you're eccentric. Quite the contrary!


Preoccupied girl,
Can you give any specific examples?

An example could be the recent decline in economics. Psychopaths were blamed for making all the bad decisions that lead to this. Other examples are terrorism and the situation in Iran a few years ago - just to mention a few things.
At present we get blamed for undermining economy and political trustworthiness. Bush, f.x., is said to be a psychopath.
Some people think we're aliens who have invaded the earth. There're plenty of conspiracy theories about psychopaths, one being the Illuminati idea.