Keeping my Eyes on The Prize. 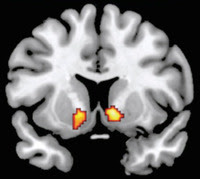 Psychopaths keep their eyes on the Prize.

Well ain't that the Truth!

This article hypothesizes that the crimes psychopaths commit stems from a combination of basically two features in us: Our lack of Empathy, and an overactive production of Dopamine in relation to the prospect of Gratification.

Image of an Impulsive Brain

All psychopaths share two characteristic traits: an inability to empathize with others' emotions, such as the fear in a person's face, and impulsive, anti-social behavior, such as reckless risk taking or excessive aggression. Neuroscientists have pinpointed neural mechanisms that may cause psychopaths' lack of empathy. But very little research has looked at what leads to impulsivity- which in some ways might be more important, because it can help predict a psychopath's tendency towards violent crime.


"All psychopaths share two characteristic traits...", when I read this I expected the following to be: "Lack of Empathy, and lack of Guilt/Remorse".

And sure enough, Lack of Empathy came up, but the second characteristic mentioned in this case is Impulsivity, the trait that I associate with the Antisocial in me.

I have no problem with lacking Empathy, in fact I'm fine with being the way I am. But I detest the way my Impulsiveness has led to so many mistakes and so much jail time.

And I can't help but think: If Impulsivity is our second co-nominator, how on earth do the so called White Collar guys pull off what they do?

When I was a teenager, in the years following the Youth Freedom Movement, the Hippies and all that, there was a notion that Impulsivity was a good thing, there was way too little impulsiveness among people, and adults were generally far too rigid and neurotic. So I was proud about my impulsiveness... But that was then, and now I see it very differently.

It's not my lack of empathy that annoys me, it's that restless need for stimulation that seems so drive me to do things I wouldn't have done otherwise. Even to this day it's a constant struggle.

Are you aware of your impulses? or are you a passenger? if you see that you having an impulsive moment, what methods do you use to control them?

Yes, I am generally aware of my impulses. I say generally, because it can happen my focus is elsewhere, and before I know it, I've taken some action I hadn't planned, or which I had planned not to.

My real problem is not so much that I aren't aware or that I don't know what to do or that it is now I need to change gear. The problem is my temper.

My frustration level is very low, and my impulses - or urges - are very strong. So I can be quite aware that I'm about to do something I had planned not to do because it is wiser in the long run to not do it, but the frustration starts building the moment I try to stop myself, and that can often be even more dangerous than going along with the impulse.

When I loose my temper I become a passenger, an aware passenger, but one who no longer has access to the wheel or the break.

I have experienced this on some occasions, and the consequences were pretty serious - if I can put it that way. Serious enough for me to be very cautious with trying to stop myself when I have... urges.

I know this must sound like I'm a maniac, or mad, but that's not the case. I'm just not very good at some of the more monotonous, event-less everyday things that most people take for granted and do without thinking.

When I sometimes manage to do that type of activity, I must use all my self control and energy in order to complete such a task. A 9-4 job every day for a week, f.x., would be a challenge - one that I could complete, IF I had a special reason to do so.

It is my understanding that impulsiveness might come from a lack of anxiety. I think many people likely have the same impulses that you do, but anxiety acts as a natural breaking system. We don't have to *try* to be anxious. It just happens without thinking about it, and it literally keeps us from acting at all. During that pause where anxiety is literally keeping us captive, still and inactive, we are given the time to reason our way back to the intended path.

Now, anxiety can just as easily get in the way as it can help, though. It's a mixed bag, is what I'm saying. There's a dial with "anxiety disorder" on one end and "impulsiveness" on the other. You have it cranked to 11 in one direction, but the other direction is just as obnoxious.

I think there is something else at play for you, though. I think some of the frustration you speak of isn't from the psychopathy, per say, but from a state of hyper-vigilant narcissism. The menial task that you find yourself forced to do (even if that "force" is your own plan) is essentially taunting you and saying "Hey, you're not REALLY special, because if you were you wouldn't have to do this!" If something taunts you like that, of course you want to act out against it. I'm not sure if that is what's going on for you, but it is possible.

Here's where I'll end, though. I can't speak more without knowing specifics.

Will a sociopath or a psychopath play games with a person whether they suspect such a person is or may not be one of them and if so, are the games more persistent if they have an attraction for such a person ? Will they create characters, or fake screen names to ask such a person things about themselves, into hopes of leading on the victim and be purposely unpredictable in hopes of a cat n mouse game or rabbit chase ? What if the victim wants to be captured. Does that make it easy and not a challenge ? Just wondering what everyone's thoughts were on this.

Yet again shark - you have hit the nail on the head.

To the cute preoccupiedgirl - I have noticed your perspective from a couple of your comments - I think you a trying to understand us, and psychopathy/anti social in general, from a point of normal psychology - which much of doesn't apply. We are wired slightly differently.

I am exactly the same as zhawq in terms of frustration and anger - but - I am a secondary psychopath, and have higher than normal levels of anxiety - The case you state is incorrect. Sorry for my bluntness.
I am highly impulsive with high levels of anxiety ( though this is still a little different to a nuerotypical's anxiety) and low threshold for frustration. They clearly do not lye on the same linear scale

Meanial tasks are frustrating - they are frustrations because they are impeding what we would like, or how we think things should be.
When frustration builds -its like putting a blow torch to the bottom of a thermometre, it rises at record speed towards the sky. Giving into our impulsiveness lets us get of the merry go round before it reaches epic preportions and we really loose control and we become real dangerous.

Essentially our impulsiveness leads us to act on what our id or ego wants - we tend to lack any regulation from the superego - which might explain where our lower threshold for impulsiveness in comparison to normal people, actually originates from.

Personally, I find my anxiety to be a very positive influence, it often pops up in place of fear or the superego, and as such helps to mediate my behaviour. It makes me stop and think - something from the unconcious is saying - whoa -you aren't taking this into consideration - and stops me acting on thrill or impulse or ...bloodlust. Once I place this subconcious indicator - it disappears - and am free to be free or act with caution.