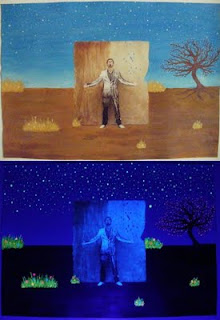 Just recently I found myself in a situation suddenly surrounded by 3 guys who were about to complete a drug deal. Even though they had guards positioned at strategic positions to alert them if there was sign of any police coming in, they were visibly agitated. I'm pretty sure that not every other person could've seen it, but to me it was clear as day. - However, one of them was so nervous he actually said so and attempted to speed up the action. It was not one of the typical attempts at stirring up agitation in the others, hoping for an opening or a possible better deal. No, this guy was really, really nervous.

Who is to Say Which One View is The Most Correct?


It was a while since I'd been witness to Criminal Activity such as this taking place, so I stood my ground and watched, interested in seeing how things would commence and in finding out if I myself would feel any different from how I used to feel.


What feelings or emotions I could detect in myself were... none. It was just as always, except for my attention to this nervous guy, which for once I didn't attempt to use or manipulate in any way. I did something new, something I've only done with young guys I used to mentor. I said: "Don't be nervous, there's no reason to!"

His reaction was typical, and I immediately realized I'd been trying to do something that wasn't possible. He went: "But I can't help it!! I'm so NERVOUS!!" He looked to each side, stretching his neck to look behind him too, all of which would've made the situation worse had the police really been nearby. - I tried a few more times: "Relax, if the police arrives you'll be alerted! Besides, you're not the one they'll be interested in!"...

All to no avail, of course.

A little later they had finished their business and went each in their different directions. - I saw the nervous dude half walk, half run towards a parking lot a bit further away down the opposite side of the street, and I knew that if the police happened to drive by at that moment, even though the others had left already, they'd pull over and search this guy. He was obvious prey, not only to the police, but to any street crook on the look out for someone to mug for an easy buck.

He disappeared into the parking lot, and I went on my way, taking the stroll I was there originally to do in order to find some good, fresh fruit which I don't have available in my immediate neighborhood.

All along I kept noticing the state of absolute calm that I was in. It's the calm I am always in, have always been in during such situation, whether or not I'm directly involved.

Until recently I have never doubted that this is a sign that I have a strong character and self discipline.

I never attributed it to me being a psychopath with Flat Affect. - That's the new angle, one which I have only recently been able to understand why clinical psychologists and other emotionally neuro-typical people view and classify so entirely differently from how I've always seen it myself... That is, I actually didn't know about this angle before and always merely thought they didn't know what they were talking about, that they didn't know me and plainly misunderstood me.


At this point I think both parties are right, meaning that I am just as right in my interpretation as they are in theirs.
I truly am in favor of The Human Diversity, and I believe the constant attempt to narrow the human condition down to a limited mainstream common few expressions is harmful.

However, the big difference which really matters to me in regard to the experience I describe here above, is that now I DO understand their point of view - at least to some degree.
...I wonder, will they ever understand my point of view?...

Stress and anxiety for me usually don't pop up unless the mental manifestation has become so extreme that it affects my body as a side effect. Usually this occurs with high levels of chronic stressors or agitators, not single or brief events.

The only time I truly display Flat Affect, is when I 'wash my hands' of a person, after it no longer feels 'worth it' to display emotions.
It always struck me as funny because there are people that withhold emotions, because they are upset, so they think that I am being petty. For me, I feel like I've given up patronizing the offender.
Normally, I'm hyper expressive. So it completely weirds people out. Even just being a little quiet makes people wonder what is going one (or if I have a split personality lol).

Stress for me is a totally different topic. I know about 'stress' - unless I misunderstand the word, it seems to cover many kinds of states of mind and body.

To me stress comes in when I can't get an outlet for something I want to do. That can drive me completely nuts, and I do tend to become very abusive when it happens.

I understand what you mean with the description you give about how others see you and how you actually meant it. I have done this too, and have become surprised when the other person misunderstood me. I usually take it as a sign I had overestimated them, make a note of it, and try not to make the same mistake again.

really you pass by my office 5 days a week now?

why don't you ever come in and say "Hi?"


just to be friendly.

If you were able to feel anxious but overcome it, I would say this was the result of strong character and discipline. You simply are not able to feel it. It is just not possible. I don't think that's necessarily a bad thing at all, of course. I'm not taking that side either. It's simply a trait that you have as a consequence of your neural makeup. Neither bragging nor recrimination are necessary.

Hmm. I wonder if psychopaths could teach out aggression and calmness. Although I don´t understand why psychopaths get angry if they are able to remain calm? Still interesting. If we can teach people to be anything they wan´t except what humanity regards as unethical, why not psychopathy? If I´d be a bombtechinician that could turn my psychopathy on. Then it would be a great asset! note that I don´t mean delinquent behaviour that anyone can learn by either brainwashing, political ideal, living in a bad environment etc. That´s just a result of ciruimstances. I am talking about being able to shut down emotions, remain calm or become extremely aggressive if needed, like when being attacked!

hey shark, you say that you are always dead calm. Surely not. There are times when you have feelings and emotions right? Just not for other people.

Or is that the difference between shaallow and flat affect?

Lol this is how a liberal pantywaists describes a drug deal. This whole article was bullshit and horribly written. "I can't help it I'm so nervous!!" and my favorite " don't worry if the cops do show up you're not the only one they'll be interested in." Like our we suppose to believe this comically written rendition of a drug deal that shows the author has never been in an actual one.