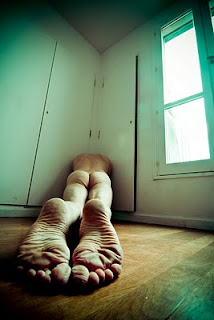 I've always taken pride in being able to tell people I don't know what Boredom feels like, because I never get bored. NEVER!

I don't remember when, but at some point when I was a child I was told that intelligent people never get bored because they always know how to find something to do. And I tuned right into that. Zhawq certainly knew how get entertained, and truth be told, I certainly did.

The entertainment I sought wasn't always what others would call agreeable, in fact it seldom was. And more often than not it would the kind of entertainment that only I found amusing, but then, I really found it amusing.

Boredom?... Not THIS psychopath!... Zhawq does NEVER get bored!
So when I once overheard the staff in a correctional facility for children talk about 'How do we keep Zhawq occupied so the other children can get more space?', and 'Zhawq's recurrent boredom is a problem!', etc., I was dumbfounded.

Me, bored? But I was NEVER bored!


Later I would hear the same kind of remarks read aloud when my first diagnosis was being proclaimed for me, and I would find it yet again later on in my journal papers that no one thought I had access to, on a pre-release trip from jail when I served my first sentence.

This kind of thing used to infuriate me when I was younger. To me it was as if they were saying I was stupid, unintelligent and had no wit or sense of how to entertain myself.


I knew better. - I knew exactly how to entertain myself, and I became better at it for every day, every week and every month. By the year I would become so good at it it eventually got me in trouble such which I had never anticipated. But I could deal with that too.

When I was in Solitary Confinement in prison ... a practice that was common at the time - one needed not have done anything wrong, and all newly arrived went into isolation at least for the first month or three - I got through that with surprising ease... Not without Restlessness or without feeling Uninspired, but I never reacted in ways that I've seen - and heard - others do.

The words: Uninspired and Restless, they describe very well what I call that which I understand professionals call Boredom.

To them it looks like I am easily bored, but to me it looks very, very differently.

They think I get bored easily because I have a shallow emotional life and need a stronger impact from sensations because of this. - I understand what they mean - that is, now I do. But I certainly couldn't always see it!


Since I have never had more or deeper emotions than I do now, and since I can't feel what others feel and therefore also can't really know if they have more or deeper feelings than I do (though of course I can easily tell they have DIFFERENT feelings than I do - I mean, I've been using that very fact against my surroundings for as long as I can remember), there is no way that I can tell truly if my feelings are not as deep or strong felt than those of normal, empathic people.

I'm learning these days, as I write this blog I am learning, and studying these things. But this is a very recent thing.

I always saw myself as a very deep person indeed, so deep in fact, that I was capable of encompassing emotional content that others couldn't bear!

So when I could actively inflict pain on others, physically and mentally, in ways that I understand few can imagine - I've always thought my ability to not only do so, but to also take various forms of pleasure in doing it, that had to be because I felt more and deeper, and all in all I had to simply be most people's superior, emotionally, as well as intellectually - generally speaking, at least - and even physically - also generally speaking.

Hence I could never quite grasp that recurring notion coming from professionals, the clinical psychologist and psychiatrist staff. It just never made any sense... until recently when I began reading further into what psychopathy is when viewed from their perspective.


I have found it's a lot about words, about how we describe ourselves and how others describe us.

What they call 'Zhawq gets easily bored', I call 'I have a greater Need for Inspiration'.

And indeed a lot of the words I see used about psychopaths such as myself are somewhat heavily loaded with emotional content, and most of it is not flattering in the least. I can't help but sometimes thinking it cuts me of...
Then again, that's another construct on my part.

I almost lied to my readers there - and that's something I have to be en garde about all the time. I will tell you about this another time. For now, please accept my apology!

To tell you the truth, seeing how empathic people describe psychopaths such as myself, interests and amuses me.

I avoided the term psychopath because of the way we are viewed and talked about, as defective human beings. A section of humanity that is inferior and inadequate, dysfunctional.
Until I found out that that was just what people who didn't understand or like us said.

I have experienced boredom and for me it is very dangerous. Usually I remain at a flat 'emotional' level that some might translate as contentment. For reasons unbeknownst to me, on occasion that level decreases and I become... anxious. This is when I am most prone to violence because nothing makes my blood move like the sound of a scream or a squeal and the sight of blood, who knows why. This is boredom.

The reason people think you are bored Zhawq, is because a symptom of boredom is a constant need for varying entertainment. The child who can quietly color in his coloring book for an hour is considered not prone to boredom. The child who colors for five minutes.. begins scribbling outside the lines, using random colors, then ripping the pages out, creating paper planes and origami, throwing it at the other children, doing cartwheels- this is a child easily 'bored'. That is part of the link to this kind of behavior and ADD or ADHD.

I'm not saying I agree. I'm simply stating most likely why they think that. I believe your definition of boredom may be sitting around and moping at not having anything to entertain you. That is generally how I define boredom as well but in childcare and I can imagine the Corrections system, that definition is altered. My definition of boredom is a current lack of contentment with your current activities--an issue you obviously don't suffer.

They call it ADHD, I call it being exciting.

Yes indeed. People have no tolerance for quirks anymore. The truly Eccentric are a dying breed.

I don't think eccentrics (real ones) are a dying breed, and if anything, their eccentricities have become more severe in such a repressed Western Civilization. I might be projecting, but I think most that can handle flying under the radar do so when feasible to avoid being ostracized. I could just be projecting, but a lot of the 'eccentrics' I've met who wear it on their sleeves are attention whoring fakes.

Need for stimulation, I totally understand that.

Boring isn't such a bad word.

There are attention seekers, and there are accidents or something to do with being ruthless in pursuit of fate. Eccentric? I guess so. I don't know too many people who go about their lives going towards fire when it's hot. And it is hot.

"I don't know too many people who go about their lives going towards fire when it's hot. And it is hot."

I guess you're right. It's just that to me it apparently takes a whole lot more "hotness" before I start sweating.

"For reasons unbeknownst to me, on occasion that level decreases and I become... anxious."

I believe I understand what you mean. I can't say I've been there myself, but I've met and spoken with some who have.


"This is when I am most prone to violence because nothing makes my blood move like the sound of a scream or a squeal and the sight of blood, who knows why."

Ah yes.
From your description this is exactly what happens to me also. It's what I call the Antisocial Streak in me. It's been a big part of my life to be honest. - When it is less bad I can direct my activity to other, more agreeable things, but this one has been really bad and a big part of the reason I've spend so much time in jail.

And yet, the greatest motivator is my curiosity. That was how it came about the first time.
(Note to self: Maybe I should write an article about that, I guess I really should. Some time I will)

I see. I do not call it that. To me it feels more like a 'Need', need for - well, Inspiration, as I call it. Such things inspire me, 'fulfills' me, if you will.
But I guess it's just as much as Need for Stimulation.

Still, why call it boredom? Wouldn't boredom be more likely to make you fall asleep?

Then again, the experts agree with your interpretation it seems. :)

I was in a very very potentially dangerous and perhaps illegal activity the other week. -Competely true story, BTW. There was a person I trusted, but who I didn't think was as bright as I am, and there was this other person I didn't have a clue about. This other person (potential scary person, but ultimately turned out to be harmless, quite good company, and helpful..) said that I was similar to his v young daughter who was in the "But Why, Daddy" phase. I was not bored in the least bit, I was extremely interested and very focused, if not obsessive, in my learning everything there was to know RIGHT NOW to understand what it was I was completely focused on. I think I got a lot of useful information. I believe other people would need 4 or more meetings to be able to make a sound judgement about the arrangement being offered. I have a feeling that this person was put off a bit. But I walked away with information, and I didn't give a crap what that person thought of me. I doubt I will hear from THAT person again, because that person told his superior about my unending questions and concerns. I still don't know everything. I think that is what is scaring them all. I suppose I have learned something here. Impulses to ask WHY, WHY, WHY, WHY are annoying to some. I think I would probably shoot myself if I had to work with someone like this (me) regularly. However, being who I am, I know I am projecting...I am projecting. Actually, I haven't a clue what this person thought of me. However, the energy that I spend thinking and overthinking my behavior (in general) is exhausting. So I have decided that it isn't important anymore. Now I have APATHY about the whole thing and -pretty much everything about my life. But tomorrow is another day, and tomorrow I will feel different. What do any of you think?

Lol, you guys are freaks