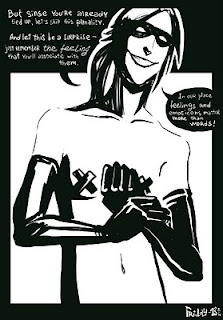 There is so much confusion about the labels, Psychopathy, Antisocial Personality Disorder, and latest Sociopath, so I've decided it would be a good idea to address this issue.
After all, it is so much easier to understand what we say to each other if we know what we're saying, no?

I found a good little article that addresses the differences between Antisocial Personality Disorder and Psychopathy. I think it is well written, concise and to the point, and so I took the liberty to post it here - linking duly back to where I found it.

What do we know about Psychopathy?

Bernie Madoff asks “Am I a sociopath?” Psychologists are more likely to use the term psychopath than sociopath, reflecting our interest in the individual mind. What is a psychopath and what do we know about people who do fit this description?

Is there such thing as a criminal mind?

For quite a few decades, the mental health field has attempted to classify and study the personality traits of people most likely to engage in criminal behavior. In other words, they have tried to diagnose the criminal mind. In the DSM-IV and DSM-IV-TR, the official diagnostic system of the American mental health field, the diagnosis of antisocial personality disorder describes people who habitually violate social norms and moral codes.

What is antisocial personality disorder?
People with Antisocial Personality Disorder (ASPD) are characterized by callous and exploitive behavior and by a lack of empathy or remorse. In DSM-IV, a person with this disorder demonstrates a pervasive pattern of disregard for the rights of others as evidenced by at least three of the following criteria: repeatedly engaging in illegal behavior; frequently lying, using aliases or conning others for personal profit; impulsivity and lack of future planning; irritability and aggressiveness; reckless disregard for the safety of self and others; consistent irresponsibility, with repeated failures to sustain employment or fulfill financial obligations; lack of remorse as evident in indifference to or rationalization of hurting, mistreating or stealing from others. This definition has been criticized, however, for being too focused on behavior instead of personality traits and also for requiring evidence of conduct disorder (a childhood variant of ASPD) before the age of 15.

How is psychopathy measured?
The foremost expert on psychopathy today is a psychologist named Robert Hare. He has developed an intensive interview to measure psychopathy named the Hare Psychopathy Checklist. His first version was published in 1980 and the revised version (PCL-R) in 1991. The PCL-R is a 20-item clinical rating scale that is scored based on information from a semi-structured interview and available legal files, medical records and collateral interviews with someone who knows the subject well. Although the maximum possible score is 40, the average scores in both male and female offender populations range from about 22 to 24. Hare uses a cut-off score of 30 to distinguish psychopaths from non-psychopaths. He believes that psychopathy is more of a category than a dimension. This means that someone either is or is not a psychopath. Notably, other researchers disagree and believe that psychopathic traits fall on a continuum.

How common is psychopathy?

I did consider making a post about Antisocial Personality Disorder to keep the definitions separate and easier to look up, but in this case I think it would ruin the article. It was written to be a small text, quickly summarizing the two conditions in one go, and that is how I've decided to keep it.

I will add more articles on each of the sub-groups, as well as more DSM-IV oriented descriptive texts, in the future.

That is very true.

Personally I feel fine about there being so few of my kind of people, because we're different from most people in that way that generally speaking we don't have much to say to each other.

Thank you for your input.

would you agree with my summing up zhawq ?

That anyone can become a sociopath, they are damaged by life and have become similar to ASPs in their mind because it helps block out their pain.

Someone who is has an anti social personality has a psychopathic personality, basically the same but on either end of the same linear scale- which is genetic and environmental. While many theories include behavioural indicators - it is essentially a pathological difference - attempts to include things like trouble with the law and high rates of rescinding only confuse the matter and have no real place in defining a persons pathology. Currently psychologists view psychopaths as being ASP but being more extreme in difference to normal pathology than most with an ASP.

how rare ? Do you disagree with the 1% theory ?