Interview with B. - Part II. 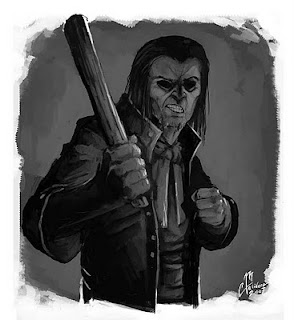 B: I guess you can safely say my childhood was dominated by Conduct Disordered behavior.


Zhawq: Yes, I gathered as much. B, have you ever been to jail?

B: Man, have I ever been to jail. It's less than 2 months since I was released the last time. Prior to that I did little over ten years for murder ... two in one, no less, and I've done 5 years for murder as a youth also. In between that I've done time for various things.


Zhawq: You mentioned something about not caring about whether others know what you are and what you have done in the past. Will you explain that further?

B: Sure. - Well, when I say I don't care if others know about me - what I am and so on - it's only where the Internet is concerned. The Internet's a new thang to me, y'know. Having been in prison for so long I've never really become acquainted with this brilliant technology, so recently I thought ... after having been browsin' around for some time, and also seein' what you've been doin' here ... "Why not? Might as well see how people will react if they hear from someone like me, and if I just tell 'em stuff from my angle as I really actually do see it.


Zhawq: That's why you agreed to let me have this Interview with you?

B: Yeah, but it's more than that. I've been participating elsewhere also. Just on a single forum though, but it was quite the experience where seeing how others react to someone like me is concerned.


Zhawq: Would you care to tell us about it? How did people respond, and what did you tell them?

B: Well okay, at first I just went to that forum ... y'know, a forum for Personality Disorders, they had a board specifically for Antisocial Personality Disorder ... In hindsight I can see I wasn't doing things the smartest way I could've. I actually invited a trolling numbnut to try and engage me in an online dick-measuring contest, and at the time I thought "Hey, why not? It's a way to find out more so why the hell not", so I humored the bitch. It was a girl, actually. Real Antisocial, which in itself ain't no problem to me, but she was narcissistic as hell too and before I knew it one third of all my posts went in reply to her shit.


Zhawq: Shit? That's all she gave you?

B: Well, Zhawq, I'm not one to call shit on everybody, it's not like that. I was merely being inexperienced ... it's new to me that people can address in every way they wanna and there ain't shit I can do to repay their favors. That lured me into doing what I would've done in real life, where things would also have ended differently. But that's not the issue here.


Zhawq: What's the issue then?

B: The issue, I'd say is that ... Hell!, I'll be damned if I didn't run into the last thing I'd have ever expected from that angle ... the Antisocial angle, that is. Thing is, I came there to be honest, which I was, and still am - I'm still frequenting the place, as I've found there ARE a few genuinely interested parties around, or they come once in a while, anyway - and then, when I'm finally being totally honest, people don't believe me.


Zhawq: They didn't believe you?

B: That's what I'm sayin': They didn't believe me! (laughs out loud)

B: I'll be damned if I know, Zhawq. Maybe it's because of the way I started out. But still, I'd think it was quite apparent; y'know, when I talk genuine, I don't exactly say the same kind'a thing that normal people say.
But I've thought about it some more. Latest there was a newly arrived participant who - as the second of maybe two who seemed to sense that I'm genuine ... Hah! 'Genuine', what a word to use for being a psychopath! (chuckles) ... and he started asking me questions about some of the things I'd been saying in previous posts - things most of the others, and certainly not the little shit-head I'd been saying 'em to, hadn't asked further into. The guy actually seems quite intelligent (pauses) ...

...And he says to me at one point: "Y'know, Blake, one doesn't wanna be had! That's why I've been asking about you being a psychopath and stuff, to see if it was for real, that you weren't just posin'!"


Zhawq: Posing as being a psychopath, I've seen quite a few examples of that too...

B: Well I ain't seen any examples o' that ... until now that is. And when this guy wrote this to me, it just made me wonder, 'cause ... y'know, between ourselves, I mean - people who are psychopaths ourselves - we never have any trouble seein' who's what. I mean, have you ever had issues with spotting a psychopath, Zhawq?


Zhawq: Well, generally speaking, no. But that could be for other reasons. I'm not myself a psychopath, you know.

B: I know that? ... (Sarcastic) Right!! ... But you know what I mean. Thing is, I hadn't expected that others, even the Antisocials and the Sociopaths - that they would have such a problem spotting us. But then, I'm fairly sure some of 'em were just having a go-around with an Internet newbie. (laughs)

Still, makes you wonder, eh? Psychopathy has become such a status symbol you can't go clean and be open about it without being questioned, people suspecting you for just being out to gain notoriety or somethin'. I almost regret telling 'em I've killed three people. Ha!


Zhawq: Really? You regret telling them that?

And just for da record to da readers: I was being ironic/joking/sarcastic. You know what I mean.

Your blog is awesome. :)

How exactly do you spot a psychopath so easily, especially behind the facade of charm and helpfulness? Can you please write a post about that?